For any RH and The DO GOOD ASSASSINS fans out there… christmas comes early!

We will be playing the first three Tuesdays in December at the Dakota Tavern in Toronto.

It’s an early show (7pm – 9pm) and is all ages, so don’t forget to bring your l’il assassins along as well. Twenty-five years ago, Edwyn Collins scored the biggest hit of his career with “A Girl Like You”. Buried near the end of this international smash was a wistful lament about the times: “Too many protest singers, not enough protest songs.” Considering the current political climate, it’s pretty clear that we could use as many modern day protest songs as possible to help the good folk of Planet Earth come together and kick against the pricks.

Fortunately Ron Hawkins, one of Canada’s sharpest, most politically astute pens, has recognized the need for some new music that can educate and inspire change. The principal songwriter of beloved rock band Lowest of the Low (singer/guitarist Hawkins, drummer David Alexander, multi-instrumentalist Lawrence Nichols, bassist Greg Smith, guitarist Michael McKenzie) has trained his keen observational eye on the state of the world and has created a universal call to action railing against divisiveness and complacency. We’ll let Ron pick up the thread from there:

“It’s been a while since I felt the need to take the small p in the politics of my songwriting and capitalize it. Probably not since the 80s, when Reaganomics rankled and the threat of nuclear annihilation seemed to loom on the horizon. I spent the 90s and onwards embedding my politics in the personal stories of people trying to get through the day. I wrote about the trees instead of the forest. But with fascism on the rise again throughout the world it’s time to hit ‘caps lock’ on that P once again.” 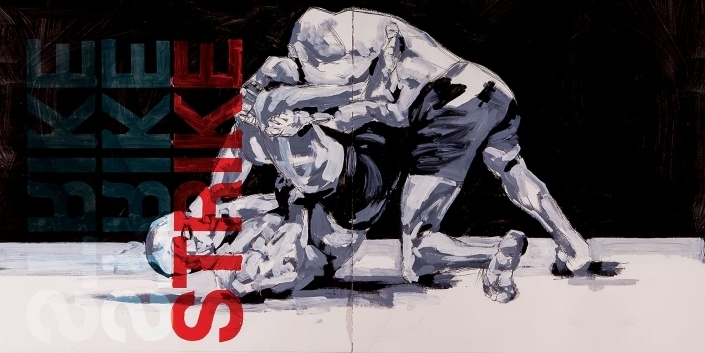 Enter Agitpop (Warner Music Canada),the new Lowest of the Low record about revolution and redistribution… liberation, love and justice. Produced by Grammy-winner David Bottrill (Tool, Muse, Peter Gabriel, Smashing Pumpkins), the album serves as a mobilizing manifesto that examines the dark clouds engulfing society then challenges the listener to make a difference. In case you were worried that all sounds like a joyless screed, rest easy: it’s also hopeful, funny and melodic as fuck.

Most notably, the lyrics are an even greater cause for celebration than fans have grown accustomed to since Shakespeare…My Butt, the Low’s venerable debut. The new album is brimming with ridiculously catchy, impassioned rallying cries for widescreen activism (“Permanent Revolution”, “The Ballad Of Late-Era Capitalism”, “New Wave Action Plan”, “The Night Of A Thousand Guns”), small-scale altruism (“Midnight Maryanne”, “Imogene”, “Seven A”, “When She Falls”) and a mixture of the two (“The Barricade”, “Love N’ Justice”, “F-Noise”, “A Thousand Lights”, “Bottle Rockets”, “Bonnie And Clyde”).

As Agitpop unfolds it reveals a multitude of deftly devised lyrical Easter eggs, alternately playful and poignant, that tip their cap to seminal recordings from the group’s major influences, as well as their own collective mythology. Trainspotters can listen for nods to The Clash, Bob Marley, The Beach Boys, Bob Dylan and The Smiths, while also encountering allusions to classic Low songs “Bleed A Little While Tonight”, “Salesmen, Cheats And Liars”, “Black Monday” and “Just About ‘The Only’ Blues”.

Back to Ron for the last word: “Songs don’t make a revolution, that’s not their job. They exist to be the oxygen we breathe or the nutrients we need to keep the blood pumping so we can get shit done. Your heart is a muscle and it’s as big as your fist.”

Presale tickets will be available for 1 day only, tickets go on sale to the general public Jan. 19 at 10 am.  Please use this link and the code below.

Well, it was a journey. A true journey! But after a few months the final touches have been added to the new Lowest of the Low record Do The Right Now! Stay tuned, we’ll be keeping you posted on developments and release dates. The DGA will accompany BR on the western swing of their Canadian tour.

Better snap up your tickets quickly, this will be sure to sell out in no time. On June 23rd my merry crew hit the Horseshoe Tavern to capture myself and the DGA opening for Art Bergmann. This live performance is part of the footage we then used to create the video for Swamp.

It’s the 3rd video from my recent record Spit Sputter and Sparkle. The video is a desert dystopia, the song inspired by months of marathon Breaking Bad sessions. Haze, dilapitated shacks, skulls and snakes.

Once again a big shout out to Jill Riley, Ruby B Hawkins, Kathleen Olmstead and Tim Thompson. And this time a huge thanks to the folks at the Horseshoe Tavern as well.

Swamp is scheduled to premiere on Exclaim Magazine’s website as an exclusive feature on Wednesday, August 17th. On June 11th the same merry band of videographers marched once again into a rented room at Artscape to embark on a second DIO (“do it ourselves”) project.
After copious amounts of face paint and a couple hours of pitch blackness, save for a single blue industrial light, we shot the footage for Till IT Kills Ya –  a montage of heck of sorts, and a tribute to Kurt Cobain and the pitfalls of celebrity.
Once again I have to thank Kathleen Olmstead, Jill Riley, Ruby B Hawkins and Tim Thompson for their help, creative ideas in the heat of the moment and their willingness to roll up their sleeves and do whatever it takes to get the shots in the can.
Till It Kills Ya is scheduled to be up on the site the week of June 20th.

KICKS OFF TOUR DATES ON
MARCH 29th IN WINNIPEG

TORONTO, ON – March 24, 2016 – Canadian singer-songwriter, Ron Hawkins, will release his new album, Spit Sputter and Sparkle, tomorrow via Pheromone Recordings. The album features 11 new originals, including the first single/video, Beautiful Girl, which is sitting pretty at #12 on CBC’s R2-20, and check out the whole album today as part of First Play on CBCmusic.ca. Before Ron kicks off his upcoming tour dates on March 29th in Winnipeg, he will spend two nights at Lee’s Palace on March 25th and 26th with Lowest of the Low (full details below). Spit Sputter and Sparkle is Ron’s 15th album of original material and due to lift him onto the musical pe destal he has clearly earned. Album is available on iTunes http://bit.ly/rhsssitunes and physical at http://bit.ly/rhssscd .

What the press have been saying:

“…his latest artistic creation is a sparkling thing of beauty.”
– Winnipeg Free Press

“There’s plenty here for fans of Hawkins and Lowest of the Low and if this is what he can come up with on such a quick turnover, then we’d happily receive an album every year from one of the country’s most prized artists.”
– CBCMusic.ca

As lead singer/multi-instrumentalist of Canada’s legendary Lowest of the Low, Ron has enjoyed many accolades through the years. Chart Magazine honoured the group’s 1991 debut album, Shakespeare My Butt, with spots in the top 10 of the Top 100 Canadian Albums of All Time, Ron has received Toronto station 102.1 The Edge’s Lifetime Achievement Award (2000), and has been voted Songwriter of the Year by NOW Magazine’s reader’s poll in 2000 and once again in 2015. In 2008 Lowest of the Low was inducted into the Canadian Indie Rock Hall of Fame and awarded gold records for Shakespeare My Butt.

On March 13th a ragtag band of videographers (read friends) marched into a rented room at Artscape and embarked on a DIO (“do it ourselves”) project.
In three hours (and for $75) we shot the Beautiful Girl video, and after a day of editing in i-Movie we came up with this… the first video for Spit Sputter and Sparkle.
My intention is to make a video a month for every song on the album. Stay tuned.
And pop in often to see how the challenge goes.
But till then enjoy.
Thanks to Kathleen Olmstead, Jill Riley, Tim Thompson and, especially, Ruby B Hawkins (who shot %90 of the footage she didn’t appear in).