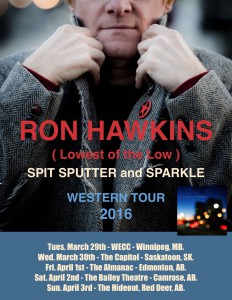 Hey Folks,
Been getting alot of requests for a western swing. So here it is.
Myself and the charming, multi-talented Brian MacMillan will be bringing my new record Spit Sputter and Sparkle to your town.
Hope to see you all out.
Tix available here:

With the release of the Low’s dual singles, Ron’s friends at Resonator caught the recording process on camera. The clip for “The Kids Are All Wrong” takes viewers into the studio with the band, where they were “pounding on drums, slashing guitar chords and screaming into microphones” over the course of two days.

The behind-the-scenes footage is just a sneak peek at a mini-documentary project that’s in the works. But before the full details are revealed, let the anticipation build by watching the video for “The Kids Are All Wrong” below.

The toggle switch that signals the Lowest of the Low exists is thrown all the way to ON!

Today the Lowest of the Low released two new songs. Ron wants you to have these free new tracks! Take them. Download them. Email them your friends.

THE KIDS ARE ALL WRONG and IN THE BLINK OF AN EYE were written by Ron Hawkins, performed by David Alexander, Ron Hawkins, Brian MacMillan, Lawrence Nichols and Dylan Parker and were recorded with the help of Joe Dunphy at the sublime Revolution Recording in Toronto in October, 2015.

You can find them at Soundcloud right HERE.

The Low are back, and look forward to seeing you out there soon.

Though I don’t usually feel comfortable posting messages about nominations (seems a bit narcissistic) I’m quite proud of these ones so here goes. The DGA are up for best band this year in the Now reader’s poll. And I’m up for best Songwriter and best male singer. Feel free to vote for Hayden, but I’d prefer if you voted for me.
And Lowest of the Low fans… we’ll see you all this summer at various shows in Toronto and Stateside.
DGA fans look for us in your home town and at the Turf Festival in Toronto. We are also launching into recording our next album in November.
Cheers everyone,
Ron
Best Male Vocalist
http://bestof.nowtoronto.com/2015/nominees.cfm?category=152&subcategory=1361
Best Songwriter
http://bestof.nowtoronto.com/2015/nominees.cfm?category=152&subcategory=1368
Best Band (The Do Good Assassins)
http://bestof.nowtoronto.com/2015/nominees.cfm?category=152&subcategory=1350

Okay, We’re a little prejudiced here, but Ron’s song Peace & Quiet, currently sitting at #10 on CBC Radio 2’s chart, should really be sitting at #1, shouldn’t it?

It’s the best song on the chart…c’mon…admit it.

Let’s make it number one. Vote for it right HERE

Ron and the Do Good Assassins will be on Canada AM tomorrow (February 5th) at 8:30am approximately. They will be performing on the AM Soundstage. Canada AM is Canada’s most watched national morning newsmagazine, and appears across the CTV network.

On the same day Ron and the Do Good Assassins’ new album Garden Songs is released, a brand new video for Peace and Quiet surfaces. We’ve posted it here. The video is directed by Richard Peirce and Chris Tait.

The first single from Ron’s upcoming album Garden Songs, called Peace and Quiet has entered the rotation at CBC Radio 2.  A reworked version of the song that first appeared on Ron’s 2007 album Chemical Sounds is working up Radio 2’s Top 20 Chart.  You can help by placing your vote HERE.

Peace and Quiet’s lyrics are worth a study.  We’ve got them HERE

Check out the first of a couple DGA videos from Southern Souls and the great Mitch Fillion.
This one is called Kingdom of the Sun and was shot at the Don Jail in Toronto. What a weird coincidence that two members of the band have had a total of 4 incarcerated family members in that fine institution.